- October 02, 2011
Earlier this year I attended Pink Impact at Gateway Church in Southlake, TX with my mom, my dear friend & her mother in law.  It was a 4 day getaway for me to just be & receive. I needed it desperately, because it was just a few months prior that Mel told me that he knew that he knew that the Lord would be transitioning us soon to more of a lead pastor role.  As you know by my previous post, I was a little resistant at first. :)  I was doing my best to trust that Mel had heard from God and even though I knew in my spirit that he had...I was just consumed with worry.

During one of the sessions of the conference there was a prophetic ministry time.  Many ladies were called out & received specific words for their lives.  I so badly wanted to be called out, because I was desperately seeking direction & confirmation.  They never called on me, but at the close of the session they passed out a pink envelope to each woman present.  Inside the envelope was a note...each one was different & prayed over by the Pink team.  They prayed that the woman who needed to receive that specific envelope would receive it.  Now, I know I'm a Pastor's wife & I fully believe in prophecy, but I have to be honest, I was skeptical.  I wasn't sure that my note would apply to me but, here it is... 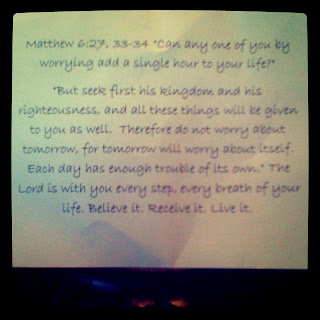 It couldn't have been more accurate for where I was at during that time. It's a verse I've heard a thousand times & I had been reading over and over and over again.  But, when I opened that envelope and read it at the conference...it came alive to me.

You see, God knew exactly where I was at and made it very clear to me that He had it all under control.  That weekend I released my worry to Him & just like the note says to do...I began to believe it, receive it & live it.  I put this note next to my desk at home where I would see it daily.  Over the months & weeks to come whenever a moment of worry would arise I would go back to this note & remember that the Lord was guiding our every step.  Looking back over the past few months, I'm amazed at what He has done & how He has taken care of every little detail.  He has truly ordered our steps!

So, friend, if you are struggling with worry today...take the above note as your own.  It is a promise for all who believe.  Seek Him, give your worry to Him, trust Him...He's got it under control.

Babe Nicole said…
I'm taking the note!!! This so very deeply applies to my life right now as well. I needed this verse today. Thanks for sharing, Kim. I didn't know you were blogging, but I'm glad I know now! XOXO Love, Babe
October 2, 2011 at 10:04 PM

Jan said…
Kim - Thanks so much for sharing this post. I can't wait to forward it to our prophetic team. They will be so blessed by your testimony. You are a faithful woman and I've seen you turn from worry to faith. You did receive it and you are living it. Thanks for being such an encouragement to me.
October 18, 2011 at 9:25 PM

Lori @ Katies Rose Cottage Designs said…
That is so awesome! Thank you for the wonderful reminder that our Heavenly Father is with us always!
October 18, 2011 at 9:33 PM

Shawna said…
This is what my card said...

Psalm 29:11: The Lord gives strength to His people; the Lord blesses His people with peace. Others like to be around you because of the peace that the Lord has given you.

Within 30 minutes of receiving this card at PINK - which btw, they had to retrieve because they ran out of cards on our row - my husband was laid off from his job. We were unprepared, blindsided and unsure of what was next.

After 10 wks of unemployment he took a job in Austin - we were devastated about moving. 5 wks later, they fired him - the day after he attended his first home Bible study with a church in Austin...he returns home and to 2 more wks of unemployment. He's working again, in the same industry, same kind of job, more responsibility, closer to home, more pay - God is faithful.